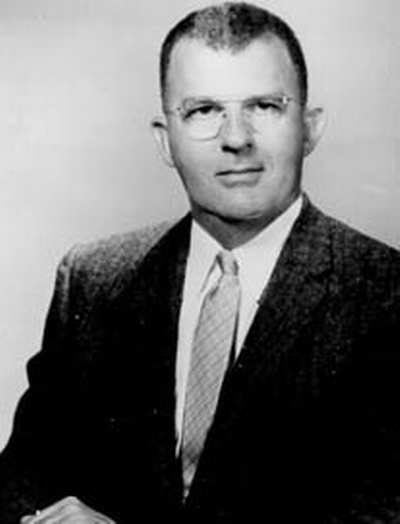 Davis was born in Lewisport and earned a degree in electrical engineering from the University of Kentucky in 1934. While there, he played basketball for legendary coach Adolph Rupp and was a member of the 1934 team that set a national record with 23 consecutive wins.

Later in 1934, Davis joined the Ken-Rad Tube and Lamp Corp. in Owensboro as an engineer. When General Electric bought Ken-Rad in 1945, Davis was named manager of operations.

In 1956, he became general manager of the company's electronic components division with its headquarters in Owensboro overseeing plants in Syracuse, Auburn and Schenectady, N.Y.; Tell City, Ind., and Anniston, Ala. He was elected vice president of G.E. in 1960. At one time, the General Electric plant here employed 6,700 people.

In 1954, Davis was elected city commissioner, where he served until 1958 under Mayor Cap Gardner.

"He was one of the all-time outstanding leaders," Gardner said Friday. "He was vital in getting the first industrial foundation started here" in 1957, Gardner said.

That commission oversaw the switch from a strong-mayor government to the city manager form. Because of his engineering background, Davis was appointed to oversee Owensboro Municipal Utilities for the commission, Gardner said.

Taylor said Davis was active in many civic organizations. He was an original board member with Junior Achievement, president of the local chamber of commerce in 1949 and a founding member of Owensboro Progress, a group of business leaders who identified projects the community needed, Taylor said.

One of those projects was building the current Daviess County Courthouse in 1964, which voters had rejected several times, according to Morton Holbrook a longtime attorney who went to college with Davis.

"It's hard to think of anything in Owensboro that Berk wasn't leading or supporting," Holbrook said.

In 1966, Davis was promoted to general manager of G.E.'s defense programs division in Washington, D.C. About 100 local people attended Berkley Davis Day in 1966 when he prepared to leave. The Messenger-Inquirer devoted an entire page to the event.

After retiring in 1976, Davis moved to Sarasota, Fla, where he enjoyed his time playing golf, his brother-in-law Dr. Frank Yarbrough said. He eventually left there to move to Fairfield, Iowa, to be near his daughter and granddaughter, Yarbrough said.